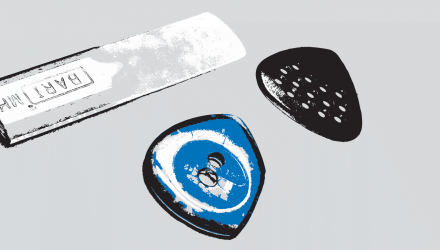 One of the great things about bringing new musicians to Newcastle is the incidental surprises that sometimes occur. When Brooklyn-based saxophonist Josh Sinton visited the Bridge last November, he was a revelation – but we were equally blown away by the guitarist in his trio, Han-earl Park.

So it’s treat to welcome Han-earl with his own trio Eris 136199 – named after the most massive dwarf planet in the Solar System. Described as working at “the crossroads of noise, melody, rhythm, space, density, contrast, synchronicity, asymmetry, serendipity and contradiction” (that’s a pretty spicy stew!), the trio teams the leader’s cyborg virtuosity with the noisy, unruly complexity of composer, computer artist and guitarist Nick Didkovsky and the no-nonsense melodic logic of Irish (but New York based) saxophonist Catherine Sikora. Together they create improvisations in which every component – melody, noise, rhythm, even a touch of bluegrass – is allowed to find its own space and direction without ever falling into an idiomatic straitjacket.

As if that weren’t a sufficiently mouth-watering prospect, we’re completing a great double bill by welcoming back the wonderful Inclusion Principle, with Martin Archer and Hervé Perez (both doubling on reeds and electronics) and drummer Peter Fairclough. Their April 2016 gig was described in BebopSpokenHere as “a memorable journey incorporating all genres of music from classical to techno”, with the reviewer “completely bowled over by the experience, leaving the building both invigorated and stimulated”.