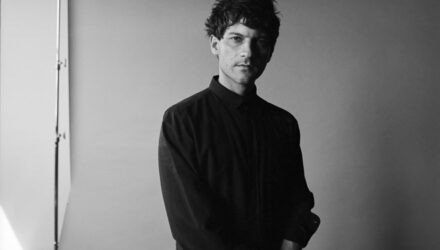 Eli Keszler is a New York based artist, composer and percussionist. His installations, music and visual work have appeared at Lincoln Center, MIT List Center, Victoria & Albert Museum, Sculpture Center, South London Gallery, Hessel Museum, Tectonics Festival Reykjavik, MoMa PS1 and many other locations, and he has collaborated with artists such as Tony Conrad, Oren Ambarchi, Keith Fullerton Whitman, Aki Onda and Rashad Becker. His recordings, most recently the acclaimed “Last Signs of Speed”, have been released on Empty Editions, Esp-Disk, Pan and REL records, and he has received commissions from the Icelandic Symphony Orchestra, ICE Ensemble, Brooklyn String Orchestra and So Percussion. Eli’s work is regularly featured in Frieze, The New York Times and Wire Magazine amongst other publications, and he has taught at Brooklyn College, Columbia University, New England Conservatory, Dartmouth University, Washington University, Mass Art and UMass Boston.

The space between composition and performance has never been more blurred. Working directly with environments, their modifications, and the situations which these environments produce allows music to take open forms where spaces, both concrete and social, form experience.

During this course, you’ll work directly with the physical spaces where you are to consider ways of structuring and thinking about music, and various ways of producing. Working with site-specificity in both physical and cultural spaces, Eli will take music as a launching point for work that could take any form or medium. Work will be encouraged which takes into account nature and environments, and the way they interact with culture and technology.

Exploration of compositional and performance ideas, examining texts, critical listening, and discussionExamining the role and effect of technology on musical processSite-specific work, taking advantage of your location to produce work informed by the environment

The course will focus on the development of a project into a fully formed on-site work, through a combination of discussion and presentation, working together as a group and individually.