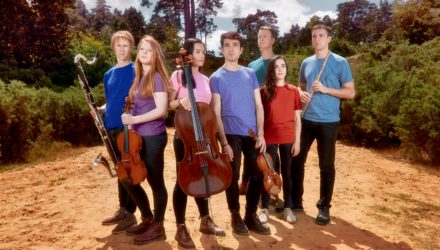 Explore Ensemble immerses instruments and audiences among a live 3D loudspeaker orchestra to present the London premiere of Natasha Barrett’s ‘Sagittarius A*’ and rare modernist works reimagined with ambisonic technology .

Explore Ensemble work at the radical frontiers of new music, offering audiences outstanding performances of internationally acclaimed composers, advocating music rarely heard in the UK, and working closely with composers on new works to foster a repertoire for the future. Described as ‘Indefatigably outstanding’, Explore Ensemble have featured at several editions of the Huddersfield Contemporary Music Festival while performing alongside the EXAUDI Vocal Ensemble, as well as feature on BBC Radio 3, at London’s Principal Sound Festival, Cafe OTO, Kings Place, the Royal College of Music, and outside of London in Manchester, Leeds, Oxford, and Germany.