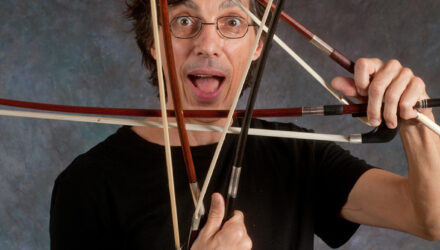 First Fridays with Robert Black is a monthly series of virtual mini-concerts featuring new music for solo double bass, streaming from his home studio in Hartford, Connecticut, at 12pm ET. The performance is designed to fit any time and place – whether it’s with morning coffee in Los Angeles, lunch in New York, happy hour in Paris, or a late supper in Tashkent.

On March 5, Black will perform highly unusual music from an already unusual repertoire. Hear what happens at the intersection of science and art in James Tenney’s Beast, witness the dazzling wordplay theatrics of Stuart Saunders Smith’s Tunnels, and marvel at the bizarre bowing techniques of Rifat Komachkov’s Sonata. Music that will fascinate, electrify, and amaze.