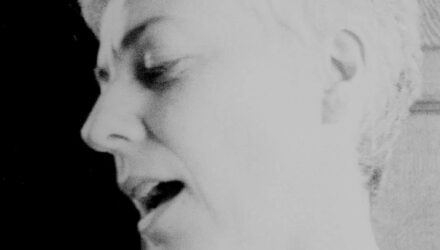 Valentina is a prelude to Wendy, a speculative portrait of, and film fan-letter to, composer and musician Wendy Carlos – self-described as “The Original Synth”. In Valentina, an unedited 100ft reel of hand-processed 16mm film, shot in rehearsal, is used as a silent score for a reading. Performer and dancer Valentina Formenti recalls part of a transcribed interview with Carlos, later edited for publication in ‘Playboy’ in 1979. Whilst the magazine interview was seen as the first public announcement of Carlos’ gender transition, these absent passages, excluded from the final edit, include her connected interests in cartography, physics, mathematics, transformations, astronomy, and her practice in solar eclipse photography. Valentina’s multiple voices are translated through Vocoder, and collaged with musician Tom Richards’ performance on Daphne Oram’s unrealised ‘Mini-Oramics’, to suggest a coming into being through sonic synthesis.

Frances will be joined by Beth to discuss her research around Carlos’ work and collaborations, in particular her arrangements for film soundtracks and use of the Vocoder (Voice-Encoder). They will speak about exploring new readings of the histories of cinema through archival materials, and how emerging themes of synthesis and eclipse will appear in the final film.