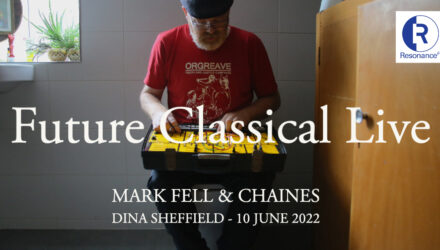 Future Classical is a weekly show on the award winning radio station, Resonance FM. Presented by Benjamin Tassie, the show features in-depth conversations with composers about their music, inspirations, and interests.

For the show’s 50th and 51st episodes, Benjamin will be joined by electronic musicians Mark Fell and CHAINES at DINA in Sheffield for a special, live recording. Join us for an evening of conversation exploring these artists’ fascinating work.

Doors will be at 7pm, with CHAINES in conversation at 7.30pm, and Mark Fell at 9pm following a short interval.

CHAINES (Cee Haines) is an award winning composer and multi-instrumentalist who writes surreal and fantastical electro- acoustic music. Their album, ‘The King’, was met with critical acclaim (The Wire Magazine, FACT Magazine), and their works for the London Contemporary Orchestra have been premiered at major venues including The Royal Albert Hall (BBC Proms, 2018).

Mark Fell is a multidisciplinary artist based in Rotherham (UK). His practice draws upon electronic music subcultures, experimental film, contemporary philosophy and radical politics. His work has been presented in exhibitions and performances at The ICA, Royal Festival Hall, The Serpentine, Victoria and Albert Museum, Barbican, and elsewhere.