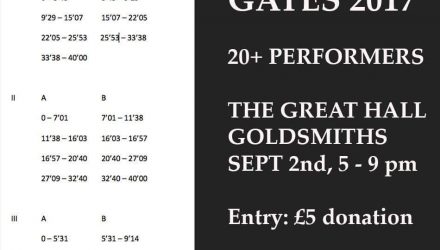 Gates was written in 2001 with the aim of creating a work using the minimum amount of information possible – when to play and when not. Otherwise the piece is completely open, even allowing players to leave the venue when not performing. Durations are based on prime numbers to keep the times staggered and unpredictable, and no two players’ scores are the same. The result is a constantly evolving work that reveals different layers suddenly or gradually, building up and breaking down in unforeseen ways, yet always reflecting the players at any given moment.

This realisation will be the most ambitious both with regard to duration (4 hours) and the number of performers. Drawing from London’s pool of experimental musicians, improvisers, and other, Gates 2017 will feature over 20 performers interacting across the 4 hour duration in the open space of Goldsmiths Great Hall.

Admission is £5 donation, no one turned away for lack of funds.