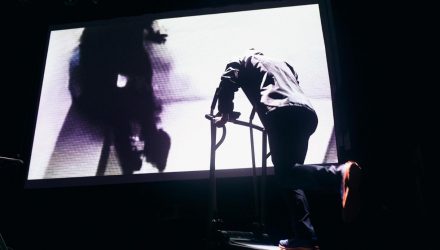 Originally commissioned by Future Everything Festival in 2016 (UK), the performance features two vocalists on treadmills, silhouetted against an episodic series of mesmerising and violent short films created by British filmmakers Chris Turner and Tash Tung. With rising acts of terrorism and the political far right across Europe, it makes an uncanny social commentary for the present day, and is a chilling reminder of Ballard’s prophetic writing.

Q.ch pour le week-end challenges what electroacoustic music is supposed to be. Journey to industrial wastelands, noisy factories and sprawling populous urban environments accompanied by thrusting gritty guitars, driving rhythms and high, floating vocal lines. The rule-book is thrown out of the window and nothing is re-contextualised, or re-sampled. Sonic elements that really shouldn’t belong together are united in a hard-hitting musical unit. Bring protection.