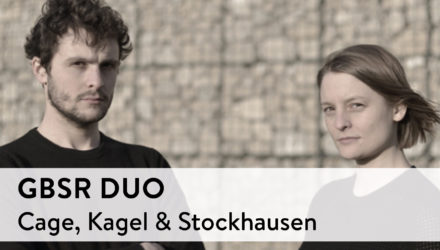 This was the first music to combine electronic and sound-processing technology with live performance, producing other-worldly soundscapes which exerted a huge influence on music for the next sixty years and to the present day.

Karlheinz Stockhausen, the maverick German composer and godfather of electronic music, cited as an influence by Lennon and McCartney, Miles Davies, Pink Floyd, Charles Mingus, Frank Zappa, Björk, teacher of members of Kraftwerk and Can, “has arguably done more to transform 20th- and 21st-century music than any other single composer” (The Guardian).

His early masterpiece Kontakte combines piano and percussion with synthesised electronic sounds in a surround-sound space-music masterpiece that is still light-years ahead of much acoustic and electronic music being produced today. Earlier the same year, Mauricio Kagel’s Transición II was the first piece of music to use tape recording to alter live sound as it is played on stage, the two performers playing the inside and outside of the piano to conjure extraordinary noises. John Cage, his compositions influenced by his Zen Buddhism, used random chance to combine the noises of everyday life with the sounds of children’s toys, inviting us to hear the world as filled with music.

Aged 25 or under? Book free tickets for this concert thanks to the CAVATINA Chamber Music Trust. (Limited availability) >> www.sjss.org.uk/CAVATINA