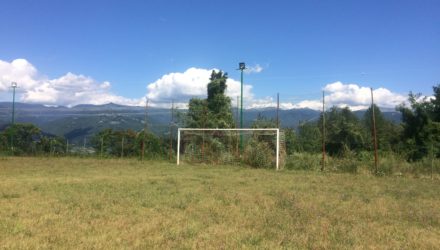 Get Some Chalk on Your Boots!

‘…the collective song and intoxicating sound of the crowd does not just provide an accompaniment to the beautiful action of the players, but is the sublime matrix out of which play emerges, the force field that energises the action…’

The exhibition features More out of Curiosity a film by Ronnie Close exploring the culture of Egypt’s Ultras; Paul Whitty’s field recording project Get Rid! featuring the ephemeral football soundscapes of the parish council pitches of South Oxfordshire; Davide Tidoni‘s studies of the sounding culture of the terraces of the Stadio Mario Rigamonti home of Brescia 1911; Duncan Whitley‘s archive of chants and sound from Coventry City’s erstwhile home Highfield Road and his study of training sessions at amateur clubs in Portugal G D Parada; Darren Luke’s photographs of Cornish football; and Bethan Elford’s studies of song and singing – or the lack of them – at West Ham’s new home the London Stadium.

At the closing event – Extra Time – on July 13th a work by Shirley Pegna and Paul Whitty exploring the sound created during a match as the actions of the players resonate through soil, grass and air; and seep across the touchline will be installed and Davide Tidoni will perform Ultras Mash-up.