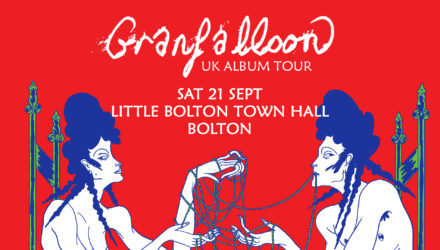 Rock It returns with a bang!!
After a great first year the young people, mentors, families, friends and community that is Rock It Bolton is back
So let’s start with a bang!

Our good friend Richard Lomax (and his omnichord and band) who did a workshop previously with Cut from Italy is playing in Bolton and Rock it bands / artists are along for the ride
If everyone is there it’s the best start and a showcase for all new Rock It members this year, more details to come but we are hoping all existing bands will perform!

We are using a new space in the town centre at little town hall, St George’s road, it’s attached to Courtyard 36 a beautiful bar / cafe also so yes there will be drinks available plus I’m sure the usual accompaniments ?

So confirmed straight away

Granfalloon are a group of musicians from the UK and Germany based in Manchester. They make ‘folktronica’ – a mixture of lo-fi folk, experimental music, and electronica
Having played Bluedot and many other shows their new LP is a work of art!! This is something not to be missed

Catalyst
Three days in the studio over the summer have provided an LP of absolute Mac De Marco meets The Smiths meets the Libertines with so much more thrown in! So so good

Holly Jenkinson
Holly is an astonishing singer songwriter and also a new mentor at Rock It. He voice, songs and music is so stunning it will make you swoon and smile leaving you in a beautiful place