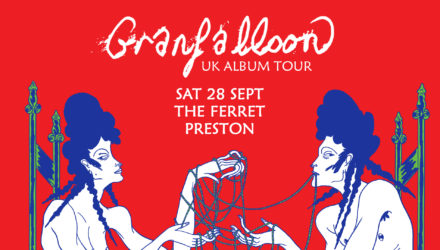 GRANFALLOON (from Manchester)
https://www.facebook.com/granfalloonmusic/
HED Presents: Granfalloon Album Launch! The band are releasing ‘RGB’, their second album which showcases their hybrid of lo-fi, folk, indie and electronica. The album weaves oddball elements, such as Omnichords, guitars, and vintage drum loops, into dreamy songs and cinematic soundscapes. It is out this October on 12″ vinyl and all streaming platforms.

Among the many textures of this album is the Omnichord, the electronic auto-harp developed by Japanese electronics company Suzuki in the 1980s. Its ‘unicorn tears’ sound giving many of the tracks on the album a woozy feel – existing in those moments between sleep and waking.

The album was recorded in Manchester between John Ellis’ Limefield Studio, WR Audio and their own studio, The Dogan. Granfalloon frontman, Richard Lomax produced the lion’s share of the album but the band also worked with producer Andrew Glassford (One Little Atlas), and Australian electronic artist/producer Jack Prest (Jonti/Sampa The Great) to great effect.

Granfalloon comprise of Richard Lomax, Dave Bertram and Peer Van See. But to launch the second album, the band’s three piece core has expanded to five with the addition of Jim Molyneux on drums and Hannah Ashcroft on vocals and guitar.
Video: https://www.youtube.com/watch?v=jb6rOCYRthI

OH MAN, THE MOUNTAIN (from Manchester)
https://www.facebook.com/ohmanthemountain/
Oh man, the mountain are a large southern gothic alt-folk band from Manchester – deadlock between the desire to live the Good Life and the Creepin