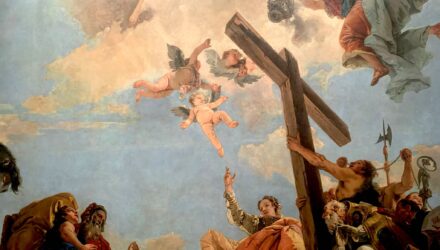 From the team behind the award-nominated ‘Fashion Opera’ cycle, described as “a whole exciting new genre of art” (BBC Radio 3) and “a perfect combination of show and costume” (Vogue Italia), comes Hareflight: an opera for flute and tenor about truth, knowledge and impossible speed.

How do you capture the only-just-vanished, the rush of movement faster than sight or understanding? A myth for our modern world with its dazzling excesses and crippling uncertainties, Hareflight features music and poetry by Alastair White (“genuinely original” – TEMPO; “highly poetic…excellent” – BBC Music Magazine) and fashion by Issey Miyake from the UU Studios archive hung in mid-air across the historic Leicester Guildhall. Curated by Gemma A. Williams, with performances by flautist Jenni Hogan and tenor Niki Zohdi, Hareflight will push the limits of perception in a festival of virtuosity, colour and the thrill of the wild, kinetic chase.

White explains, “Hareflight explores the relationship between truth and knowledge, dramatising motion, light and even affect to propose an aesthetic of the thought or dance which moves faster than its crystallisation into sentence or gesture. The team and I were very much inspired by The Discovery of the True Cross by Tiepolo, taking the painter’s radical apprehension of both the infinite and the apparent, an idea we’ve tried to unpack through a language of developmental speed, interpretive complexity and paradox. The opera hopes to offer evidence of the imperceptible (or that which is beyond the listening individual’s apprehension) as a significant aesthetic force. And, in turn, to prove the hypothesis that certain relations exist as material instances external to musical objects. In opposition to trends that sanitise collisions of meaning between opposing models, Hareflight celebrates the dramatic potential of the irreconcilable.”

Hareflight is part of UKNA City Takeover 2022. Tickets are free but limited.

Jenni Hogan is a prolific solo and chamber performer and composer praised as “ravishing” (The Guardian) and for her ability to “knock off complex phrases, harmonics and extended techniques with such subtlety you’d hardly know what was involved” (BBC Music Magazine). Recent highlights include performing at St John’s Smith Square, on Sounds New BBC Radio 3, Queen Elizabeth Hall and the Barbican as a soloist and in chamber groups.

Niki Zohdi is a composer, tenor and conductor born in Blackburn, Lancashire. He is currently halfway through his PhD in composition at the University of Leeds supervised by Mic Spencer and Martin Iddon. As a singer, Niki studies with Ashley Stafford and frequently sings with various cathedral choirs in the north of England, as well as with Leeds Baroque and Borealis. He has also been a guest soloist with various other ensembles throughout the UK.