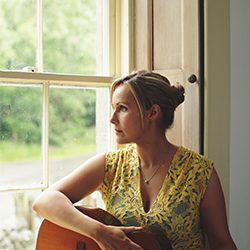 Heidi Talbot was born in Ireland became a folk star in the USA as a member of the Irish American band Cherish the Ladies, and now lives in Scotland, where she is married to the celebrated fiddler and multi-instrumentalist John McCusker.

With a background like that, it’s hardly surprising she should develop a style that switches easily between Celtic and Americana, but subtlety is Talbot’s magic ingredient. Her gossamer voice and delicate re-working of traditional and contemporary material earned her rave reviews for her 2012 album Angels Without Wings. The girl from Co. Kildare, who spent several years in New York, slips effortlessly between musical worlds but retains a personal modesty rooted in traditional folk.

Over the past ten years Heidi has performed all over North and South America, the United Kingdom and Europe, Australia and New Zealand performing in the finest concert halls and international festivals. She is equally at home in front of a symphony orchestra, a performing arts centre, a folk festival or even at the White House.

Heidi has been nominated for folk singer of the year and best traditional song by BBC Radio 2, best live act by the Scottish traditional music awards and best female vocalist at The Irish Music Awards.

She has shared the stage and recorded with Eddi Reader, Idlewild, Mark Knopfler, King Creosote, Tim O’Brien and Jerry Douglas.

While taking time off to stay home after having her second baby, Heidi has spent the last year overseeing the building of a recording studio in the bothy neighbouring her house, built in 1779 and set in the heart of the Scottish Borders. The studio was designed by legendary record producer & studio designer Calum Malcolm. Heidi will release her new record, Life in 9 Songs on her own label, Under One Sky Records, Autumn 2016.

The performance starts at 7.30pm

Promoted by the English Folk Dance and Song Society (EFDSS).