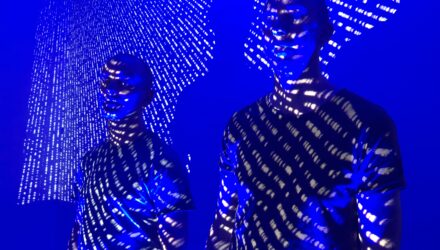 Electronic improv duo Herschel 36 perform as part of Make Music Day, in a series of performances curated by Glasgow Life. The concert series marks this international day on 21st June 2020, celebrating their status as a Unesco City of Music and the rich seam of new music from the city. The performance will be at 3pm and will be preceded by a live interview.

Herschel 36 brings together the creative forces of drummer Stuart Brown and keyboardist Paul Harrison to create a unique brand of experimental improvised avantronica that draws equally on glitchy IDM, ambient electronica and organic free jazz improvisation. Their debut album, Astrophysik, was released in 2019 and features music from their critically acclaimed live silent film score for the groundbreaking 1925 astronomy documentary, “Wunder Der Schöpfung”, commissioned by Hippfest Festival of Silent Cinema and Film Hub Scotland. They are currently working on their second album to be released later in 2020.

“[…] the duo’s moody, ambient score struck just the right balance between awe and alienation. It was like nothing else in the festival – a bold but beautifully judged reappraisal of a ground-breaking movie” ***** (The Scotsman)

“Their score was one of the best musical accompaniments I’ve heard.”
BFI Sight and Sound Magazine

At the Stroke of Midnight