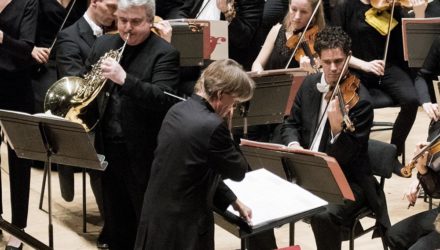 Our Principal Conductor & Artistic Advisor Esa-Pekka Salonen began his musical life as a horn player. And many horn players have played a major part in the history of the Philharmonia, including Dennis Brain, Principal Horn from the orchestra’s formation until his untimely death in 1957. To mark the opening of the Philharmonia’s 75th birthday celebrations, we have commissioned a new horn concerto from Mark-Anthony Turnage, known for his dazzlingly theatrical music and skilful blending of classical and jazz, to be performed by a former Philharmonia Principal Horn, Richard Watkins.

Britten’s Serenade for Tenor, Horn and Strings is a haunting setting of six night-time poems by writers including Blake, Tennyson and Keats. Composed for Dennis Brain when he was just 24 years old, this is the piece that launched his solo career, and it has entranced horn players and listeners ever since. Tenor Allan Clayton, acclaimed for recent leading roles at Glyndebourne and the Royal Opera House, sings the part originally written for Britten’s partner Peter Pears.

The orchestra’s current horn section have their chance to shine too, in the serene hymn that opens Weber’s overture to his opera Der Freischütz and the leaping, hurtling theme that embodies the mischievous trickster of German folklore, Till Eulenspiegel, as depicted by Richard Strauss.