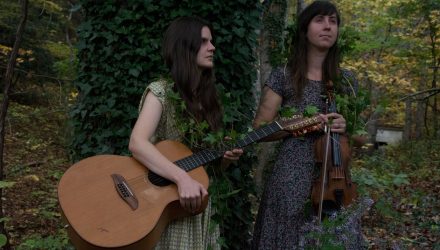 House and Land, and Sian Magill

House and Land is the duo of Sally Anne Morgan (fiddle, shruti box, banjo, vocals) and Sarah Louise Henson (vocals, 12-string guitar, shruti box, bouzouki). Sally and Sarah started playing together after Sarah opened for The Black Twig Pickers for whom Sally plays the fiddle. The duo quickly discovered that they were both interested in the same very specific forms of traditional music. Additionally, they both viewed it through the lens of their shared love of modern, experimental and minimal music. “We honor what two voices and bodies can do in one moment in time. It totally shapes our sound.”

Their playing together is wholly unmediated, without amplifiers and using just two sets of hands and voices. With a minimalist approach, their music considers the space between notes as much as the notes themselves. The material on their debut album is drawn from traditional southern hymns and Appalachian ballads that originated in England and elsewhere hundreds of years ago.

Sian Magill is a Milton Keynes based contemporary folk artist who fuses deeply soulful vocals with intricate, acoustic finger-style guitar. Drawing influences from folk, jazz and blues as well as classical literature, Magill is cementing a reputation as an emerging talent of note within the UK singer/songwriter circuit.