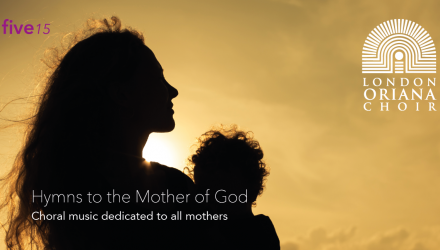 Hymns to the Mother of God

As Mother’s Day approaches, join London’s most versatile choir as they explore music both sacred and secular dedicated to mothers everywhere.

Including works by Imogen Holst, Roxanna Panufnik and john Tavener and the world premiere of the latest five15 composition by Rebecca Dale.

London Oriana Choir perform in London and around the world, delighting audiences with music of all ages.

The choir are also pioneering the five15 project to promote women composers. Over five years, 15 choral compositions are being specially commissioned and performed.