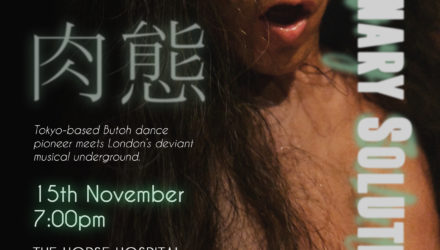 Imaginary Solutions is a collaboration between the Tokyo-based Butoh dancer/martial artist Takahiro Tomatsu, and the acclaimed London-based experimental music ensemble ARCO, led by composer performer Neil Luck.
Butoh is a form of Japanese avant-garde dance, exquisitely pinioned between traditional and contemporary philosophy and art forms. Takahiro Tomatsu is an acclaimed practitioner based in Tokyo.

In troubled times of impossibly complex problems, new, radical, weird perspectives are required to imagine equally impossible solutions. Drawing on arcane anglo-Japanese folk entanglements, the hypnosis of late night TV, and crowd-sourced dream journals, this night secreted right in the dark heart of the metropolis attempts to divine new perspectives via the exploratory physicality of Butoh and the weirder underside of experimental music.

An intense and ambitious new international collaboration in one of London’s most idiosyncratic independent venues, Imaginary Solutions set out to fashion strange new tools for strange new futures…

N.B. The performers will also hold a free, open rehearsal on the day at 4:00pm, at the performance venue.