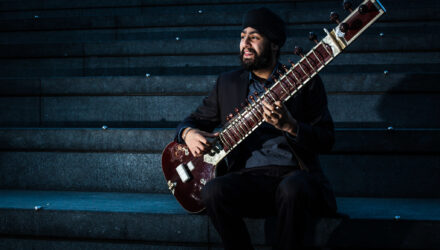 In Focus: Music for Sitar

Jasdeep Singh Degun leads a double life as a sitar virtuoso and a contemporary classical composer – and he joins us for this free livestreamed concert to give two world premieres: a haunting solo work from Tehran-born, Manchester-based composer Atefeh Einali; and Psappha’s prestigious annual commission in honour of former Patron Peter Maxwell Davies, a major new piece for sitar, strings, piano and percussion by Glyndebourne composer-in-residence Ninfea Cruttwell-Reade.

Also this evening, a quintet of tenderly lyrical miniatures by the great Errollyn Wallen, who recently reworked Jerusalem for the Last Night of the Proms; and Gary Carpenter’s slippery tribute to the art of the clown. Tom McKinney from BBC Radio 3 presents the concert on YouTube – watch live on the night or catch up on demand for seven days after the livestream, all for free.