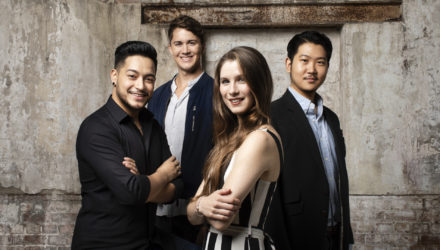 From the spiritual to the celestial, the programme explores the humour, joy and pathos of the human condition. The evening will feature songs and arias by Handel, R Schumann, Schubert, Mozart, Bizet, Donizetti and Bernstein, including ‘La Bonne Cuisine’ which sets four recipes from Emile Dumont’s ‘Fine French Cooking’.

The world première of the song cycle ‘It’s Not Me, It’s You’, an Independent Opera commission, brings together frequent collaborators composer Elena Langer and poet Glyn Maxwell. Written for soprano, baritone and piano, Langer sets poetry that is “organic and musical, dreamy and realistic at the same time”, creating a song cycle verging on the operatic.

Russian composer Elena Langer’s music has gained appreciation across the world and her highly acclaimed vocal works are colourful, extraordinarily expressive, playful and often humorous. Rupert Christiansen (Daily Telegraph) described her opera for WNO ‘Figaro Gets A Divorce’ as “that rare thing: a modern opera that exerts an immediate emotional impact”. Langer and Glyn Maxwell, the award-winning British poet, librettist, playwright and novelist, first collaborated in 2002, setting Maxwell’s poem ‘Ariadne’; they subsequently composed the operas ‘The Lion’s Face’ and ‘The Girl of Sand’ together.