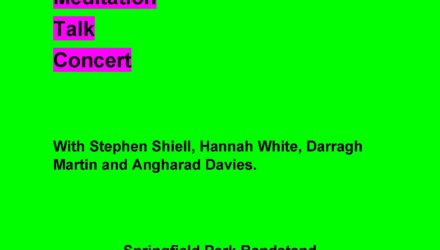 Springfield bandstand was built in 1905. A bit earlier in the 19th century this semi open structures spread in Europe as spaces for democratising music but also in some countries like France to convey nationalist ideas through military music. Original influence of the bandstand could be linked to Chinese ancient constructions dedicated to meditation. Nowadays, their musical functionality has declined but users creativity have taken over for organising in some of these spaces tai-chi classes, birthday celebrations, football impromptus, barbecues, yoga practice and all sorts of social gatherings…

For this occasion we will meet in that space for a Pauline Oliveros Sonic Meditations session led by deep listeners Stephen Shiell and Hannah White, a talk on climate change by writer and activist Darragh Martin, and a musical performance by violinist Angharad Davies.