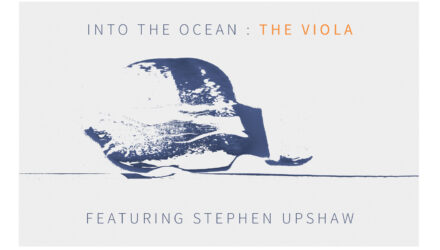 Into the Ocean: The Viola | Featuring Stephen Upshaw

Into the Ocean’s first concert features the internationally acclaimed violist Stephen Upshaw. Performing an all-British programme for solo viola, including Jonathan Harvey’s ‘Chant’ and newly commissioned works by composers Heather Stephenson and Georgina Bowden, both of which feature on Into the Ocean’s upcoming album.

The concert is co-hosted with Trinity Laban Conservatoire of Music and Dance, and has been supported by the TL Innovation Award.

Curated by James Layton, one of six winners of the inaugural TL Innovation Award, ‘Into the Ocean’ is an integrated concert and recording series showcasing the work of recent graduate composers. The project has its origins in James’ time at TL studying composition, where a training highlight was how frequently his works were performed and recorded. He recognised the importance of this for developing artists, but noticed that many contemporary classical record labels tend to focus on work by established composers. To remedy this, James set up ‘Into the Ocean’, a new platform for emerging writers.

Originally due to be performed last month at The Hundred Years Gallery, this solo performance by American violist Stephen Upshaw has been reinvented for a digital audience.