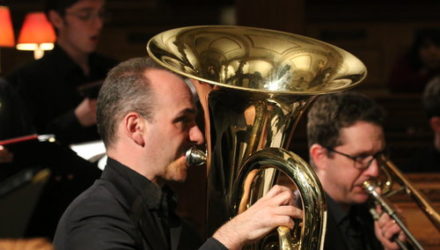 JAM – Music of Our Time

This concert gives us the chance to re-visit commissions and to surround them with music from our annual Call for Music.
This year we revisit The Fifth Continent by Paul Patterson, with words by Ben Kaye, describing the mysteries of Kent’s Romney Marsh. Set for choir, brass, organ and countertenor, this magical work starts with all the performers offstage; space and physical movement are used as an integral part of the musical structure. A sense of boundless mystery prevails, encompassing a huge range of extremes, from the dark and austere, to the serene and tranquil via storms of violent winds and high seas. It is a particular thrill to welcome back countertenor, Andrew Watts, who premiered the piece.
Songs from the Marshes by Rory Boyle, with words by Claudia Daventry, was commissioned by JAM last year. Boyle and Daventry set out to write a collection of modern folk songs based on subjects of a timeless nature which hark back to an earlier era. Hence the songs deal with love, death, war, ghosts and nature all relating to communities living near the sea. The world premiere of this evocative set of songs was given by the BBC Singers during JAM on the Marsh in July. Two of them receive their London premiere in this concert.
We also have the pleasure of bringing six other new pieces of vivid, vibrant music from the great pool of talent working in the UK today. These works were chosen by JAM’s reading panel from our annual, anonymous Call for Music. There will be some new names to JAM regulars alongside two who have been involved before, Phillip Cooke and Richard Peat.