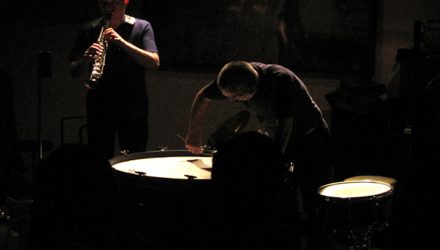 Although Eddie Prévost and John Butcher shared the stage at Derek Bailey’s 1990 London Company Week they didn’t perform together again until March 2005 – in duo at Goldie’s Oligarch in the East London Foundry. Eddie chose to work with tam-tam, bowed cymbals and drum resonators – as heard on their CD interworks.

Additionally, they have recorded in trio with John Tilbury – Eddie’s AMM partner for over 20 years in – once for a BBC broadcast, and once for the CD Trinity.

In 2009 this trio was joined by Christian Wolff and Ute Kanngiesser for a concert on London’s Freedom of the Cityfestival (released as Sounding Music by AMM).
In 2010 the duo played a 10 date tour of Japan, organised by Hisashi Terauchi.
The Oya Stone Museum concert was reviewed (in Japanese) by Kazue Yokoi at Jazz Tokyo.
Some tour photos are here.

Since 2011 they have also performed in a trio with bassist Guillaume Viltard with Prévost playing drum kit.