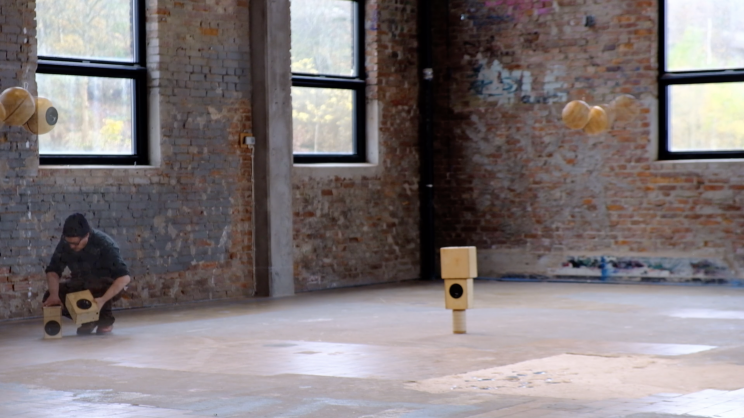 John Chantler is a musician and organiser living in Stockholm, Sweden.
He mostly works with synthesizers and electronics to create unpredictable, highly dynamic music where passages of spare, alien beauty bridge held chords, saturated in harmonic distortion. In 2019 he started building a system for performance consisting of multiple battery powered synthesizer/speaker things that can be variably suspended, swung, spun and set in locations without depending on the typical concert/club infrastructure and classical modes of performer/audience interaction.
His most recent solo recording ‘Tomorrow is too late’ (October 2019, ROOM40) was originally commissioned by INA GRM for the 2018 Présences Électronique festival in Paris. In 2020 he released recordings of two ongoing collaborations: a duo with saxophonist Johannes Lund (Andersabo) and a trio with drummer Steve Noble and saxophonist Seymour Wright (Atlantis).
Originally from Australia he spent a decade in London before moving to Sweden in 2014 where he directs a small annual festival for ‘other music’ in Stockholm called Edition. The ‘Fifth Edition’ is provisionally scheduled for early August 2020 2021 February 2022.
https://inventingzero.net
‘Katz Mulk is a performance group featuring Ben Morris, Ben Ellul-Knight with a rotating cast of collaborators. Over the past few years, Katz Mulk have developed a reputation for their mind-boggling live performances, infusing dance, sculpture and choreography with their slippery experimental electronic pop. Their most recent album ‘vital attachments’ was released on the Klammklang label, which worked up songs performed as part of their performances at Counterflows Festival and a residency at Chapter Arts in 2019. Katz Mulk have performed in lots of places in the UK and EU, and only once have they had bananas thrown at them’.
For this performance, Katz Mulk will present their recent collaborative work with the artist Mary Hurrell and the Creative Technologist Chris Ball. Katz Mulk commissioned Mary and Chris to create a series of costumes embedded with a wireless speaker system for dancers to play with and inhabit’.
Sholto Dobie was born in Edinburgh and lives in Vilnius. He works with sound, music and performances as well as organising events and exhibitions. He uses loose structures and an array of sound-sources including home-made organs, hurdy gurdy and field recordings. His performances are personal and intuitive, often coming across as delicate, evocative, and absurd.
Recent audio works include Dilo (with Lucia Nimcova, Mappa 2021), It’s Worse (with Shakeeb Abu Hamdan, TakuRoku, 2021) and the solo pieces Nevery (Thanet Tape Centre 2020). He has toured throughout the UK, Europe and Chile and performed at festivals such as Kraak Festival, Soundtiago, Jauna Muzika Festival, Counterflows Festival, Antechamber, Berwick Film & Media Arts Festival and Glasgow International.
Add to Calendar share
ADD TO CALENDAR
GOOGLE
OUTLOOK