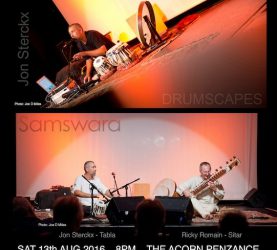 The evening opens with sitar & tabla duo Samswara – voted ‘Best Group’ in the MTM South West & South Wales Asian & Ethnic Minorities Awards 2014. Playing with the North Indian traditions of Raga & Tala, Samswara’s dynamic performances never fail to delight & captivate their audiences. The evening culminates with Drumscapes – an energising & mesmerising solo performance by world music percussionist Jon Sterckx. Drumscapes has had audiences on their feet at events across the UK, including at WOMAD, Larmer Tree and Beautiful Days festivals and even had over 1000 people spontaneously get up and dance at a TEDx event!  An event not to be missed!

“Few percussionists, no matter how skilled, can captivate and keep an eager festival audience with a solo performance but Jon Sterckx’s stunning Drumscapes are a masterclass in control and rhythm that hook the audiences from the first beats and carry them through to an invariably ecstatic climax. Centred on the tabla, darabuka and riq (a Middle Eastern tambourine) Jon combines beats and rhythms from across the globe with cutting edge sampling and innovative vocal sculpting, building layered soundscapes that mix the experimental with the traditional and creating a uniquely intoxicating, exhilarating and, many say, trance inducing performance quite unlike any other.” Musicport Festival 2015.

“… a unique journey through all quarters of the world built around his inter-continental range of drums: tablas, riq, darabuka, vocal percussion, and much more! He is the creator of magnificent soundscapes that will transport you into an unmissable musical nirvana!” DJ Ritu – DJ, radio presenter, world music pioneer.

Samswara – Jon Sterckx (tabla) & Ricky Romain (sitar) – have been playing together for over 14 years, developing their dynamic performances and spontaneous, playful musical dialogues through which they journey from slow, meditative melodies through to fast and highly detailed exciting rhythmical interplay. Samswara were performers at the National celebration of British Asian Live Arts in 2008 and were voted ‘Best Group’ in the MTM South West & South Wales Asian & Ethnic Minorities Awards 2014.

” . . .The brilliant sitar of Ricky Romain in duet with Jon Sterckx’s tabla wizardry was a first class example of musicians “playing off” each other, their evident joy never becoming indulgent, and never compromising the aims of the music. . . .” – Colin Sell, BBC Radio 4.