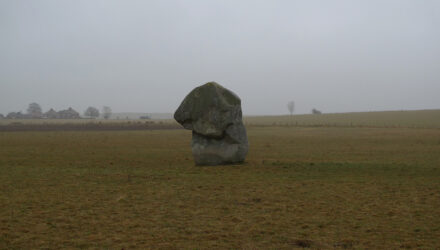 The photograph shows Eve, one of the two Longstones at Beckhampton, near the Avebury complex in Wiltshire. Dated to 2500-2700 B.C. the Avebury stones predate Stonehenge. Adam sits in the same field, out of the picture, a taller, thinner stone. Adam in fact fell in 1911 and had to be levered back into an upright position.

‘Society and its Sculpture’ is an inquiry into the concept and ecology of permanence. Monuments, statues, icons are said to be “set in stone”. However, recent events and protests have shown that nothing is immutable. Authoritarian power and past injustices need to be challenged – the removal of the sculptures that celebrate such hegemony is part of this process.

At the Thaddaeus Ropac gallery in London, Ron Mueck is currently showing ‘25 Years of Sculpture’ which includes a recent work (2013/2015) “Couple Under an Umbrella”. At twice life-size, it shows an elderly couple in repose under a beach umbrella, their expressions quite ambiguous, the message of the piece oblique.
The sculpture, described by the artist as ‘mixed media’, is close to photography and has been described as “hyperreal”.

The act of sculpting is not restricted to the use of materials like marble and stone. Many forms of composition and their documentation can be seen in this light, notably the act of recording music. Sculpture is a slow process. Not only does it take time, it needs time, making it an uncertain undertaking in the fast moving digital world we inhabit.
This sound seminar will explore how the act of sculpture relates to the sculpting of sound, in shaping the space around us – what it shows, what it leaves out, and the gap between reality and unknowable futures.

Jon Wozencroft developed his sound seminars in the late 1980s as a means of highlighting the potential of sound-related research and practice in art and design education. Primarily, the seminars promote the art of listening and seek to rebalance the dominant bias of visual culture which favours the eye over the ear. Listening both enhances one’s perceptual awareness and creates an oasis away from 24/7 non-stop media. The seminars underline the power of sound and music as catalysts for change in a context in which recorded music has been progressively devalued in the digital environment. Drawing upon forty years of working in music publishing and performance, Wozencroft moves the audience between and beyond genre classifications and makes connections where past present and future come alive in the moment.