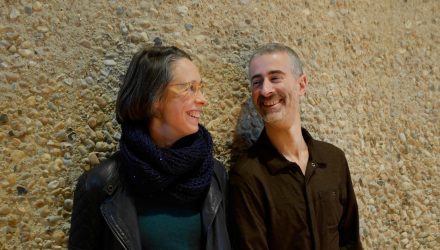 Soprano Juliet Fraser and pianist Mark Knoop give the London premiere of Michael Finnissy’s Andersen-Liederkreis (2016), which engages with the weighty tradition of the song cycle. Hans Christian Andersen is universally famous for his fairy stories, but this cycle also sets his lyric poetry and ‘papiers collés’, revealing further the fantastical, droll and profound world of his imagination.

The programme opens with the world premiere of we’ll meet again, a piano solo by composer Tim Parkinson, whose extraordinary opera, Time With People, was previously staged at City in 2015.

Juliet Fraser has built a reputation as one of the UK’s finest interpreters of new vocal music. As a soloist, she has appeared with Klangforum Wien, ICTUS, Plus-Minus, London Sinfonietta and BBC Scottish Symphony Orchestra in festivals such as hcmf//, Tectonics, Donaueschinger Musiktage, MaerzMusik and Wien Modern. She has premiered well over 100 works, many of which have been written for her. She is a founder of vocal ensemble EXAUDI.