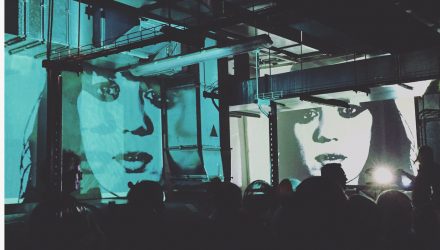 Maverick collision between noise, concealed sound and visual imagery reimagined and reinvented for 2017

World premiere at the Southbank Centre’s Royal Festival Hall (1-23 July). Adventure into the unseen in a new multi-sensory encounter of shifting sound, colour and light as KlangHaus returns to the unsung spaces of Southbank Centre’s Royal Festival Hall. KlangHaus 800 Breaths will further reinvent the gig-going experience as site-responsive, promenade theatre following last July’s critically acclaimed sell out, KlangHaus: On Air. Created by experimental art-rock collective The Neutrinos and visual artist Sal Pittman KlangHaus is a 360 degree maverick collision between noise, concealed sound and visual imagery. Akin to a duet with the room it’s a thrilling ride that puts the audience right into the music itself, almost like being inside a vast video game.

KlangHaus is reinvented from its 2016 Southbank Centre incarnation, venturing into new spaces with new songs, new visuals and new themes – but maintaining the same clash of shifting sound, colour, electronica, improvisation and disorientation. Since its debut at The Edinburgh Fringe in 2014, each KlangHaus has been newly regenerated specifically for the space it is to be performed in, whether that was a former animal hospital, furniture repository, bus depot or gospel church. ‘Breathes a lungful of fresh air into gig-going and theatre alike’ ★★★★ Maxie Szalwinska, Sunday Times ‘a blast of aural and visual magic ★★★★★ Donald Hutera, Times. Part gig, part live art installation, totally theatre at the edge of darkness.