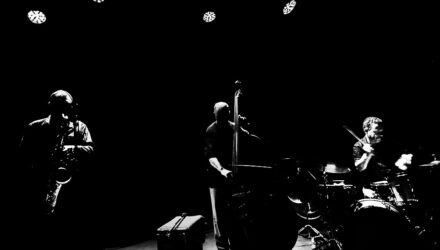 Three musicians who have met in so many collaborations, but only formed the trio Last Dream of the Morning in 2016.

“It is an astonishing sonic sound, as if the human sources of the music were born together: Edwards, Sanders, Butcher — heartbeat, bloodstream, nerves and breath, the same organism, one nucleus.

The concept of musical chiefs and leaders becomes an irrelevance to this trio, so much are they as one with a sonic unity, a metaphor for a different kind of society expressed with so much clarity.” Morning Star

John Butcher is well known as a saxophonist who attempts to engage with the uniqueness of time and place. His music ranges through improvisation, his own compositions, multitracked pieces and explorations with feedback and unusual acoustics. Since the mid 80s he has collaborated with hundreds of musicians – including Derek Bailey, Matt Shipp, Eddie Prévost, Joe McPhee, John Stevens’ SME, Okkyung Lee, Keiji Haino and Butch Morris.

Mark Sanders has worked with a host of renowned musicians including Derek Bailey, Henry Grimes, Mathew Shipp, Evan Parker, Roswell Rudd, Wadada Leo Smith and trios with Charles Gayle with Sirone and William Parker. He has a lengthy discography including a solo album, has performed internationally and played at major festivals including, Nickelsdorf, Ulrichsburg, Womad and notably at Glastonbury with legendary saxophonist John Tchicai.

John Edwards is a true virtuoso whose staggering range of techniques and boundless musical imagination have redefined the possibility of the double bass and dramatically expanded its role, whether playing solo or with others. Perpetually in demand, he has played with Evan Parker, Sunny Murray, Derek Bailey, Joe McPhee, Lol Coxhill, Peter Brötzmann, Mulatu Astatke and many others.