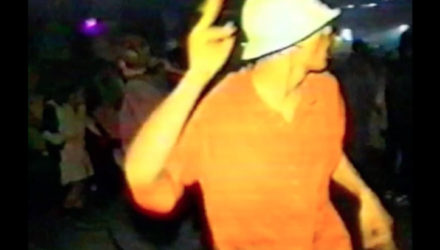 The Death of Rave’s Friday night LCMF programme skews a line from ambient-pop to EBM via black metal, Detroit techno and computer music. Special guest, Spanish DJ and industrial/pop producer JASSS comes to London following critical acclaim of her Weightless album and raved-about sets in Europe & Africa. Black Mecha, alias of Saskatchewan’s Fortress Crookedjaw (Wold), will present the EU premiere of his BM techno ‘Black Mechanical’ DJ set, and Motor City techno producer Howard Thomas, aka H-Fusion (Sound Signature, Transmat), will DJ in advance of his debut LP, due for The Death of Rave in 2019.

Qualmbient-pop artist Teresa Winter performs material from her cultishly adored albums, Untitled Death and What The Night Is For. Computer musician Gabor Lázár presents the London premiere of his scything A/V set after acclaimed EU tour dates in support of his Unfold LP, and Mancunia’s Croww clashes vantablack and neon rave musicks in a visceral new live show. DJs Beatrice Dillon and TDoR founder Conor Thomas join the dots of a rare celebration of diversity and mutuality at the periphery of the contemporary dance and electronic music paradigms.