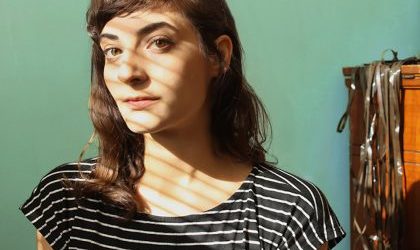 LEA BERTUCCI is an American composer and performer whose work describes relationships between acoustic phenomena and biological resonance. In addition to her instrumental practice, (alto saxophone and bass clarinet), her work often incorporates multi-channel speaker arrays, electroacoustic feedback, extended instrumental technique and tape collage. Deeply experimental, her work is unafraid to subvert musical expectation. Her discography includes a number of solo and collaborative releases on independent labels and last year she released the critically acclaimed ‘Metal Aether’ on NNA tapes, as well as a commission for percussion ensemble Tigue and a second edition of her much anticipated graphic
score book, ‘The Tonebook’, on Inpatient Press. She has performed extensively across the US and Europe with presenters such as The Kitchen, PS1 MoMA, Blank Forms, The Walker Museum, Roulette, ESS Chicago, Sound of Stockholm Festival, and the Le Guess Who Festival. She is a 2016 MacDowell Fellow in composition and a 2015 ISSUE Project Room Artist-in-Residence. For this special concert in London, Betucci will present her new sensory Projection/Reflection performance.