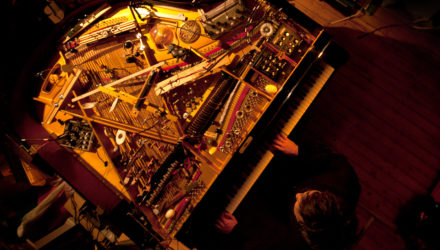 Leon Michener started piano from an early age, later going on to study classical piano at trinity College of Music with British pianist John Bingham focusing on 20th century works while developing a passion for Russian piano literature. Growing up he was exposed to a wide range of electronic music through his Fathers record collection, leading him to seek a way to perform a similar electroacoustic music live on the piano, that eschewed sequences, prerecording, or looping, committing to the goal of realtime music, created in the instant, creating everything through preparation and amplification. For this performance he will use an amplified prepared clavichord as well as piano.

“..An astonishing vocalist of haunting emotional power” The Guardian

“..One of the most captivating , and unclassifiable performers on the British music scene.” Financial Times

Composer, vocalist, multi-instrumentalist and producer Seaming To was born in London and comes from a family of concert pianists. She studied at the Royal Northern College of Music and during her time in Manchester began performing and releasing albums with supergroups Homelife (Ninja Tune) and Graham Massey’s Toolshed.