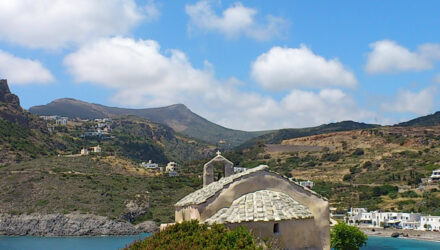 Lethe will create a filmed music theatre project using the backdrop provided by the beautiful unspoilt island of Kythira. What better location than the birthplace of Aphrodite for a modern interpretation of gods and heroes, a glittering cast of characters, from Orpheus the god of music to Charon the boatman, Hydra who guards the entrance to Hades, Persephone, queen of the underworld and Hermes, the guider of souls, as well as Nyx, Chronos and of course Apollo and Dionysus.

Each day structured musical and physical tasks will help you to explore different aspects of these characters and the stories generated around them. Using your voice or an instrument, your personal explorations in the context of music theatre will generate the material used for creating and filming the opera.

Each evening there will be a ritual drinking of the waters of the river Lethe. Blurring the border between art and life, with a chilled retsina, mojito or Mythos beer in hand, this ritual will symbolise your casting off of the character you explored that day and your reincarnation into a new character on the following day.

This project is open to absolutely anyone with a sense of adventure and an interest in performance and music. Whether as an experienced flautist or a late starter on the kazoo, a trained singer or someone who can hardly croak a note, there are characters and stories waiting for you to bring to life in the opera/film Lethe !