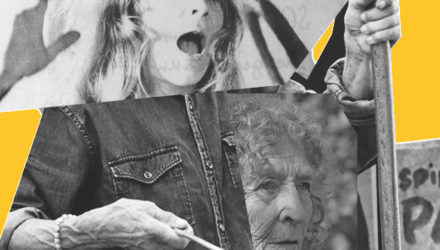 LIMPE FUCHS is a German sound artist and instrument builder whose vibrant performances develop from a real time engagement with the ecology of the space at hand. Using wood and granite stone rows, ringing bronze within pendulum string instruments and employing the percussion, viola and voice she studied at the Munich Conservatory she sensitises the process of hearing through an exploration of music-making as a part of everyday life.

Anima Musica’ epitomised the ingenious marginal freak scene of the sixties and seventies and are often cited as a key influence on Krautrock. In 1971 they hitched a handmade mobile home and stage to an old Hanomag tractor and toured Europe bringing their anarchic, uncompromising improvisations to an impromptu public at 19 kilometers per hour. A champion of egalitarian performance, Limpe quit the group in the ’80s when new experimental theatre work demanded agreement with more members and she felt that her voice was being compromised. Ever since she has devoted herself to “making music while listening to the streaming of time…with simplicity and emotion”, following the influence of soundscape artists. Whether improvising solo or with other players, Limpe unfailingly coaxes an otherworldly atmosphere from the sounds and silence.