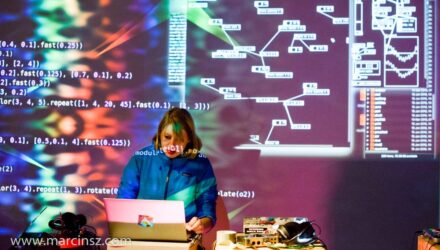 Shelly Knotts is an improviser who performs with computers and other humans. Interests in code, data and networks have lead her down strange and diverse musical paths from electroacoustic composition, through jazz and noise music to algorave. She experiments with generative and AI techniques and opinionated algorithms to make music. She has performed at numerous Algoraves and other live coding events worldwide, solo and with collaborative projects including algo-pop duo ALGOBABEZ. In 2017 she was a winner of BBC Radiophonic Workshop and PRSF ‘The Oram Awards’ for innovation in sound and music. Previously she was an academic, researching on projects around the use of AI, data and networks in improvisation and composition.

Joana Chicau
Joana Chicau is a designer, artist and researcher — with a background in dance. She researches the intersection of the body with the designed and programmed environment, aiming at widening the ways in which digital sciences is presented and made accessible to the public. The latter has been informing a practice and exploration of various forms and formats — interweaving web programming with choreography — from the making of online platforms to performances and workshops. In parallel she has been actively participating and organizing events involving multi-location collaborative coding, algorithmic improvisation, open discussions on digital equity and activism. Chicau is a member of Varia.zone and an associate lecturer at the University of Arts of London.
https://joanachicau.com

is an assemblage of live coded visual experiments performed in the web browser. The computer screen is divided in two stages: the ‘frontstage’, the interface a user normally accesses and the ‘backstage’ or the web console in which programming languages can be run. In the web console Joana Chicau calls, juxtaposes and manipulates different web programming actions which are named after choreographic concepts. The page originally filled with information, will be deconstructed and set into motion.