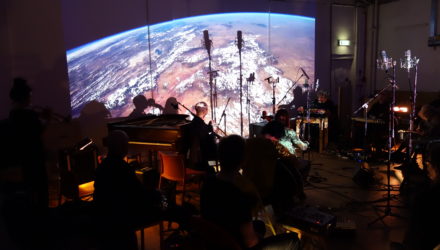 The London Experimental Ensemble has a diverse makeup of many nationalities and comprises around a dozen musicians who embrace the potential of improvisation by searching for experimental forms outside established patterns.

Following the well-received performance and subsequent release of their live recording of Cornelius Cardew’s complete Treatise, The London Experimental Ensemble returns with a new approach to the ancient folk songs of the Child Ballads. On the principle that nothing is more British than free improv, which incubated in London in 1962, and these ballads which encapsulate the last 500 years of UK history and lore, after thoughtful consideration The London Experimental Ensemble embraced the challenge of a free improv recording of these traditional ballads.”

“With a diverse makeup of many nationalities and ages, the Ensemble effortlessly ignored any tendency to drift into traditional melodies and performed their usual intuitive collaboration of free improv with member Ed Pettersen singing a cappella to his own meter. If you are open to the non-traditional, one does not need to be an aficionado of free improv styles to be transported by the fluid phrasing and fine storytelling of this excellent recording. For vinyl lovers, the recording has been specifically mastered for vinyl by former Motown engineer Bob Olhsson and delivered on 180 gm high fidelity platters. Read more on our website