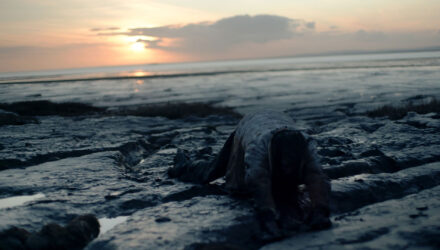 Film, field recordings and violin loudspeakers inspire an exploration of real and imaginary environments in this multimedia concert of works considering the complex relationship between humans, sounds and ecology.

Descend through the deep sea to the Mariana Trench in Leo Chadburn’s Five Loops for the Bathyscaphe. Explore the interplay between piano and environmental sound in Joanna Bailie’s Artificial Environments. Experience the twin worlds of violins and birds, brought together in the UK premiere of Carola Bauckholt’s Doppelbelichtung (Double Exposure), and be transported to Alaskan landscapes evoked by the works of eco-political composers Matthew Burtner and John Luther Adams.

Composer and curator Hollie Harding will also present the world premiere of FERAL, an audio-visual piece based on the book Feral: Rewilding the Land, Sea, and Human Life by George Monbiot, and created in collaboration with choreographer and director Josh Ben-Tovim. The piece explores themes of rewilding, ecological crisis and human connection with the natural world.

Film and electro-acoustic works by composers Alwynne Pritchard and Hildegard Westerkamp will frame the concert programme.