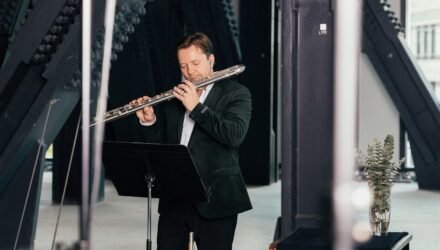 Want to know more about classical music but not sure where to start? Make the most of your lunchbreak and enjoy a free, 45-minute informal concert from LSO St Luke’s.

In this concert we hear five premieres by living composers, most of whom have been supported through the LSO Soundhub scheme.

Rising by Darren Bloom and The Spell and the Promise by Jasmin Kent Rodgman were both written for films created during lockdown, celebrating the creative energy of the City of London. There are also brand new pieces by Electra Perivolaris and Ben Gaunt, and a UK premiere by Carlos Simon.

There will be introductions from our presenter, who will tell you more about the music and the instruments, and you’ll have the chance to ask the musicians your own burning questions.

LIVE STREAM
This concert will be streamed live on the LSO’s YouTube channel, and will be available on demand afterwards. Join in with the live chat and put your questions to the musicians.

Tickets to join us in the Jerwood Hall, LSO St Luke’s are sold out and will not be available on the door.

LSO Soundhub is generously supported by Susie Thomson and The Garrick Charitable Trust.