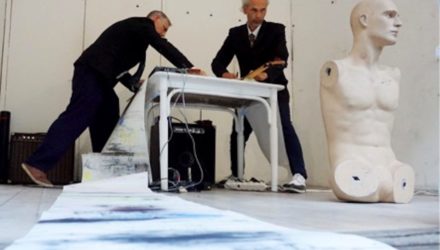 m o n o f o g are a free improvisation audio-visual group. Contemporary artists David Stuart Sutherland and Tamas Ilauszky extend their studio practice with a mix of found objects, DIY instruments and field recordings. Collaborations with musicians and performers from the Budapest underground scene and internationally means monofog are always developing and evolving. Playing with their feet in the river Danube the m o n o f o g legend began ! Mono. Our instruments are ‘mono’ – the audio junk of a disposable world. We celebrate the broken instrument and found object. The bicycle wheel is bowed – the corrugated insulation pipe is sounded. Carrots are strategically positioned on guitars. Once when playing an FM radio ( as instrument ) live on a local radio station almost suggested ‘stereo’ mind you. Fog. When one is truly lost ; then and only then can one truly find oneself. We always try and lose ourselves in a sonic space and sometimes we find an ‘oasis’ where pure sound meets with musical gesture or phrase. New and unexpected shapes stick out of the fog. That’s where we gaze.

The 21st Century collage has stretched its boundaries and we can now listen to it. The found object was once marvelled at, but it is now blown, bowed and sounded. Hoorah ! Perhaps the urinal should be worshipped for the fountain of sharps and flats than merely revered for its banal appearance – yes R. Mutt !