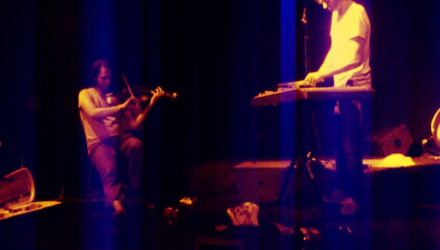 Maninkari also wrote the music of eight short films: of which recently ‘Mesmerize’ by Thomas Pantalacci and ‘Ruins of time’ by Mathieu Peteul who is their eighth collaboration with the cinematographic world.

Resina is the alias of Karolina Rec, a cellist and composer based in Warsaw, Poland. Born 1982, Karolina graduated from the Music Academy in Gdansk and the University of Gdansk. Active in Poland’s independent music scene since the late ’00s, she was co-founder / collaborator of some of Poland’s most influential alternative bands: Kings of Caramel, Cieslak and Princess, Nathalie And The Loners, Anthony Chorale and more. She has featured on numerous album releases and soundtracks (including the Oscar-nominated ‘Rabbit a la Berlin’), and has been the author of a dozen music productions for theatre. A compulsive live artist, Karolina’s style is primarily characterized by personal language of improvisation and alternative approach to melody. She has collaborated with Scott McCloud, Paul Brody, Piotr Kurek, Coldair, Scianka and many other artists.

Resina was signed to 130701 in February 2016, having sent in a hugely impressive demo. READ MORE ON OUR WEBSITE