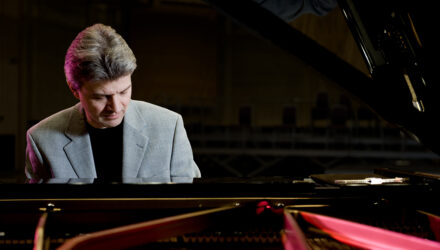 Notes From a Small Island (III)

Notes from a Small Island is a trio of concerts in which pianist Mark Bebbington showcases major works for piano by British composers of the last hundred years.

In the third and final concert of the series, Mark champions John McCabe (1939-2015), whose most ambitious and comprehensive piano work Tenebrae (1992/3) is set alongside the premiere of Robert Matthew-Walker’s contemplation for solo piano in memoriam John McCabe – The Fields are White Already. Finally, an unsung hero of British music, Robert Simpson, is represented in his masterly ‘Variations and Finale on a Theme of Haydn’ (1948), a dazzling display of keyboard mastery and compositional integrity.

Mark Bebbington’s commitment to British music is well-known and his recordings for the SOMM label are numerous and varied, having included major works by Bax, Carwithen, Ireland, Vaughan Williams, Mathias, Alwyn and Bridge, which have earned him consecutive sets of 5***** in BBC Music Magazine, a Gramophone Magazine ‘Editor’s Choice’, and an International Record Review ‘Outstanding’ accolade, prompting International Piano Magazine to write: “Bebbington’s revivals of British piano music are second to none; he could well be dubbed the concert pianists’ Richard Hickox. Bebbington has almost single-handedly demonstrated that 20th-century British piano scores have an exciting role to play in the concert hall and recording studio”.

Poulenc shortlisted for Gramophone Magazine Award – more recently, a major new recording collaboration with conductor Jan Latham-Koenig, and the Royal Philharmonic Orchestra for Resonus – part of a planned series – has produced a programme of works for piano by Francis Poulenc featuring the Piano Concerto (the last of his five concertos) and the rarely-recorded piano version of the Concert champêtre, so often performed by the composer himself. Joined by oboist John Roberts and bassoonist Jonathan Davies, Bebbington has also recorded the Trio for Piano, Oboe & Bassoon, and the Sonata for Oboe & Piano. Critically acclaimed, this recording has now been shortlisted for the Gramophone Magazine Awards 2021. A second album containing Aubade, Le Bal Masque, Flute Sonata and the Sextet has also been released.