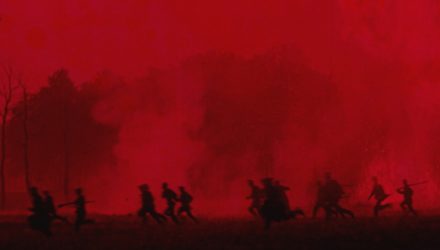 The visionary film-maker Alfred Machin’s Maudite soit la guerre is one of the earliest pacifist films, released in 1914 just one month before the outbreak of the First World War. Nearly 100 years later in 2013, Austrian composer Olga Neuwirth was compelled to write a score for the film, fusing traditional silent-film piano accompaniments with brusque strings and creeping electric guitar to bring its spirit to life. Maudite soit la guerre “reminds us how valuable, fragile and finite life is” says Neuwirth. As part of the 2018 Armistice commemorations, come and share in this poignant and startling depiction of war, with Neuwirth’s heart-rending score bringing it firmly into the 21st century. The evening also features Schoenberg’s Ode to Napoleon, composed during the Second World War, which warns of the dangers of dictators.

“Exquisitely played by the ensemble, Neuwirth’s music fades as though blurred by time and tears”
The Times on London Sinfonietta’s performance of Maudite soit la guerre at Aldeburgh Festival 2017