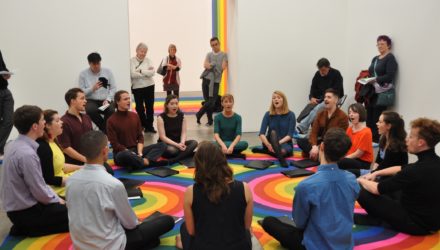 Meet you in the Maze

The fourteen professional singers of critically acclaimed ensemble echo present a performance ORIGINALLY DEVISED in response to an exhibition by New York-based artist Polly Apfelbaum. The concert explores mazes, puzzles and the navigation of the unknown, including music by Machaut, Bach, Meredith Monk and James Blake, alongside improvisation and folk song.

The programme moves from the medieval to the present day, from a search for religious guidance as found in Hildegard’s antiphon praising ‘Wisdom‘ that ‘circles all things’, to Bach’s famous motet that sets Paul Thymich’s poem describing Jesus as the ‘right path, the truth and the life’. The randomness of life and its challenges is represented by the playful nature of the medieval hocket as shown in the work of Guillaume de Machaut and in the improvisatory and aleatoric feel of Meredith Monk and Bobby McFerrin’s work. An arrangement of James Blake’s piece ‘Meet you in the Maze’ closes the concert – it tells of the unpredictability of life, and of the idea that finding others in the ‘maze’ to travel with is some kind of comfort.