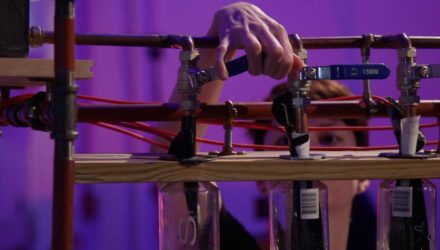 Sisyphus Distressing is a dynamic sonic theatre project, built around the myth of Sisyphus, as it was seen through the eyes of Albert Camus. Composed by Gregory Emfietzis and devised by the Metapraxis Ensemble, it consists of 7 sounding and muted acts, combining video, text, acting/movement and construction/design. This second part of Emfietzis’s work on Sisyphus (watch Sisyphus Victimised performed by the LSO), explores endless repetition and meaninglessness, struggle and failure, as well as (some sort of controversial) hope for what might come next: the realisation that life is absurd cannot be an end, but only a beginning.

The Metapraxis Ensemble is a London-based, flexible group of musicians and collaborators, first established in early 2009. Their productions focus on presenting contemporary music (often in conjunction with compositions from older eras), structured around a rendering of a tale, and reinforced by extra-musical elements. They adopt a theatrical approach for their projects: presented as single units, they often feature video / film projection, movement, text reading and staging / lighting effects. Metapraxis events have taken place in venues around London, such as IKLECTIK, Cafe Oto, LSO St Lukes, The Space, TripSpace, Iris and Chelsea Theatres, as well as in educational institutions (Brunel, Goldsmiths, Guildhall, Huddersfield, Leeds, Roehampton).