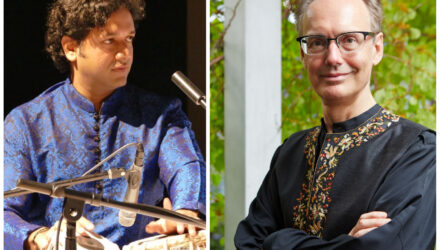 Composer, pianist and vocalist Michael Harrison will offer his debut performance of traditional Indian classical music, which he has adapted for piano with tabla accompaniment, presented by Drive East by Navatman. Celebrated tabla player Nitin Mitta will accompany him. Harrison will also perform his own original compositions which are based on the traditional ragas (melodic archetypes) and talas (rhythmic cycles) of Indian classical music. The concert will be offered both in person at La Mama Experimental Theatre Club in New York for a fully vaccinated audience, as well as live online with the video being available for 24 hours after the performance.

Although this is his first performance as a featured piano soloist in an Indian classical concert, Michael Harrison has performed Indian classical music for decades as a vocal (and occasionally piano) accompanist with his Indian music gurus Ustad Mashkoor Ali Khan and Terry Riley.

Harrison’s concert on August 12 will feature the live premiere performance of his piece Etude in Raga Bhimpalasi, which is included on his new album Seven Sacred Names (Cantaloupe Music). Seven Sacred Names was in the top ten albums on the Billboard Classical Chart upon release; The New Yorker described the album as, “music of positively intoxicating beauty.”