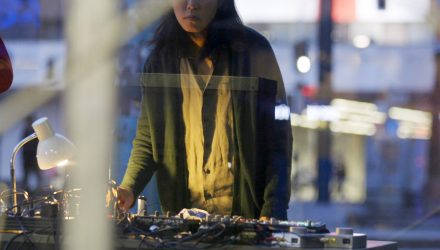 Three distinct voices from Manchester’s experimental imprint Cuspeditions come together to celebrate the release of Miki Yui’s album Mills, a joyous salute to the sun in all its manifestations.

Japanese artist Miki Yui plays sampler, synthesizer and solar oscillators and works in the fields of music, drawing, installation and performance. Yui is known for the unique nature of her music (apparent also in past collaborations with Rolf Julius, Rie Nakajima and Klaus Dinger).

David Ross is a maker of bizarre rhythmic electronics using such homemade devices as The Davestation, The Drosscilator, and is reportedly the only musician to have composed an album entirely using an analogue synthesizer built into a kettle. Alongside these devises, he also plays more conventional instruments such as Jew’s Harp, Drums, Kalimba and Kantele. His restless and eccentric artistry touches every instrument with his own unpredictable and disorientating sound.

Clive Bell is a musician, composer and writer with a specialist interest in the shakuhachi (Japanese flute), khene (Thai mouth organ) and other East Asian wind instruments. He has travelled extensively in Japan (where he studied shakuhachi with the master Kohachiro Miyata), Thailand, Laos and Bali, researching music and meeting local practitioners. He joins koto and shamisen players to perform the Japanese classical repertoire.