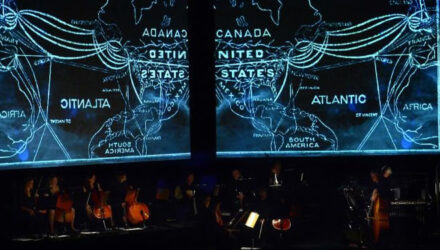 “Not only is Gavin Bryars one of my favourite composers, but he’s now also one of my favourite human beings. Thanks for a life changing experience.” (Sunny Lazic, participant in Gavin’s 2018 & 2019 workshops) “This week has been such a nugget of gold. It’s a privilege to spend a whole week talking about, thinking about, and writing music with really interesting creative people. Such an inspiring week.” (Hayley Jenkins, participant in Gavin’s 2018 workshop)

Gavin Bryars is without a doubt one of the world’s most celebrated living composers. He emerged to the musical establishment in the early sixties, playing bass with improvisers Derek Bailey and Tony Oxley – his relationship with improvisation, although of some significance, was short lived, and by the late 60’s he was working with John Cage, Cornelius Cardew and John White.

His first major works – The Sinking of the Titanic (1969), originally released on Brian Eno’s Obscure label in 1975, and Jesus’ Blood Never Failed Me Yet (1971) – were released in new versions in the 1990s, selling over a quarter of a million copies. Opera and ballet have formed important strands in Gavin’s practice – he has written five full-length operas, working with the BBC Scottish Symphony Orchestra, Opera de Lyon, English National Opera, Mainz Opera, Long Beach Opera and the Opera de Paris, alongside such renowned directors as Robert Wilson, Atom Egoyan, Georges Delnon and Jean Lacornerie.

He has worked with Opera North Projects and the Royal Shakespeare Company since 2006. He has done scores for over twenty ballets and his collaboration with Merce Cunningham, Biped, toured worldwide with the Cunningham Company and subsequently throughout France with CNDC Angers’ recreation in Merce’s centenary year 2019. Elsewhere in Gavin’s extensive catalogue of works can be found vocal works written for The Hilliard Ensemble, Latvian Radio Choir, Trio Mediaeval, The Crossing, Iarla Oâ€™Lionaird and commissions for Bournemouth Sinfonietta, BBC Symphony Orchestra, Primavera Chamber Orchestra Adelaide Symphony Orchestra and London Sinfonietta.

His background in the visual arts has resulted in works for the opening of the Tate Gallery in Liverpool, an installation in the Chateau d’Oiron, commissioned by the French Ministry of Culture, a work for the Tate Gallery St Ives, and a project for the Valencia Architecture Biennale. This visual arts affinity has also led to highly successful collaborations with David Byrne, Bruce MacLean, Bill Culbert, Juan Munoz, Christian Boltanski, Will Alsop and others.

This course does not take a narrow dogmatic line, but rather will take Gavin’s work as a starting point to examine compositional forms and strategies, working closely with the group members’ existing practice and methods, and with the aim of each student developing a finished work. Participants from all musical backgrounds are welcome, whether classically trained, improvisors, sound artists, installation artists, conceptual artists or favouring any other approach.

Bring works in progress to be developed; or start on something new whether alone or collectively. Sessions will include: Individual tuition sessions, examining and developing each student’s existing work and practiceGroup sessions examining different types of musical material, including vocal music (both solo and ensemble), string music, opera, music for dance, composing in relation to music from the past, and arranging the music of othersAccess to a list of resources compiled by GavinDevelopment of each student’s work towards performance and/or release post-workshop