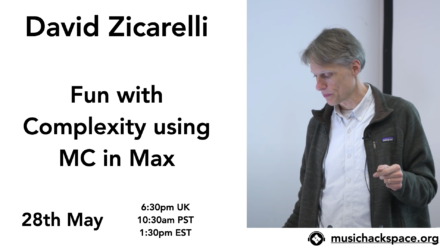 Making and controlling complex sounds on a computer where hundreds of events are happening simultaneously can be hard work. Aren’t computers supposed to make doing complex things easier? Max has a new feature called MC that can make it fun and easy to work with large numbers of simultaneous events and audio channels. You don’t need a multichannel audio system to play with MC. All the examples shown work in mono or stereo.

What is MC?
MC stands for Multi-Channel and is a way to encapsulate many audio channels, and manipulate them together. This is a very useful replacement for projects that have multiple channels of audio and require unique representations and flows for each of them. Check out below David’s presentation of MC at Loop in 2019.

About David Zicarelli
David is the founder and CEO of Cycling’74, makers of Max. David founded Cycling’74 in 1997 to commercialise Max, a programming language that had been invented at IRCAM in 1985, and licensed to Opcode for commercialisation in 1989. David worked then at Opcode and acquired the publishing rights to the software in 1997. Max grew an audience in more than 3 decades, in education and as a tool for artists. In 2007, Ableton and Cycling’74 announced Max for Live, the integration of Max into Live, allowing Ableton Live users to use Max patches in their workflow. Cycling’74 was then acquired by Ableton in 2017, and Max for Live is seeing a lot of improvements since, opening up possibilities for long time Max users to find new audiences among the Live user base.

Amy Dickens sheds light on the inclusive design practices for Digital Musical Instruments, and how to make music accessible to everyone.

Kate Stone is the founder and CEO of Novalia, a UK-based company whose mission is to create “magical” interactions. Magical…

Music in times of lockdown, with Jordan Rudess

Join MusicHackspace for a livestreamed discussion with Jordan Rudess on music, technology and the impact of lockdown for musicians. Jordan…

Hear from Robin Hunter who has recently launched a collaborative, online sequencer running in the browser: Ocean. This is MusicHackspace’s…